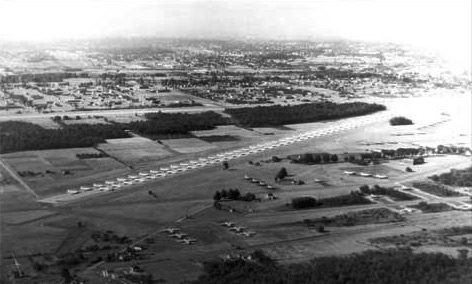 In 1927, Mayor and former World War I flyer Charles Hanna felt that the economic future of Syracuse would be greatly enhanced by a first class airport. He considered several sites in the Syracuse area, eventually selecting Old Hinsdale Field, located in Amboy Center because the land was very level and offered room for expansion. The City of Syracuse purchased the site for $50,000 in 1926. 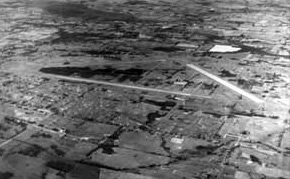 Airmail was first delivered to the Syracuse City Airport at Amboy beginning in 1928, and by the early 1930s, Ford Tri-motors were routinely touching down on the airport’s three grass runways. Airshows were a common attraction, usually headlining a barnstorming World War I Ace. Thousands of local citizens flocked to the airport to welcome aviation personalities, such as Charles A. Lindbergh, Amelia Earhart, Kate Smith, and Lowell Thomas. On August 28, 1933, aviator Wiley Post landed at the airport in his airplane, Winnie Mae.

With the outbreak of World War II, several local flying instructors at the airport were pressed into military duty and the Amboy City Airport became a flight training center. In the early days of the war, many believed that the East Coast was vulnerable to enemy attack. On December 31, 1941, twenty-four days after the bombing of Pearl Harbor, the Office of the Chief of the Army Air Force authorized the construction of an air base at Syracuse. A 3,500-acre parcel located north of the city was selected, displacing several inhabited farms. In 1942, three 5,500-foot runways were built, at a cost to the Army of more than $16,000,000. The First Concentration Command, later known as the Air Service Command, used the base to assemble and test B-24 aircraft that flew bombing missions over Europe. The first airmen to train at the Mattydale Bomber Base were known as The Boys from Syracuse. They used the base as a staging and storage area, repairing and re-outfitting the B-17 and B-24 aircraft that had been used in World War II.

On July 22, 1946, the City of Syracuse took over the Mattydale Bomber Base on an interim lease. At the end of the city’s centennial year, in 1948, the base was dedicated as a commercial airfield. The Clarence E. Hancock Airport opened to the public on September 17, 1949. The terminal was a renovated Army Air Corps machine shop, located on Malden Road in Mattydale, which is currently the site of Signature Flight Support, a fixed base operator at Syracuse Hancock International Airport.

The airport was named after Clarence E. Hancock, a congressman who served from 1927 to 1946 in the 36th District, which included the City of Syracuse and all of Onondaga County. Mr. Hancock’s family and friends petitioned the Syracuse Common Council to have the new airport named in his honor because of his longtime service and dedication to the citizens of Onondaga County. On September 19, 1949, a Colonial Airlines flight became the first departure from the airport, traveling to Wilkes Barre, Pennsylvania, then on to Baltimore, Maryland, and Washington, D.C., before returning to Syracuse. A short time later, an American Airlines Convair arrived from Buffalo, New York, becoming the airport’s first arriving flight. In 1949, a four airlines operated at the airport: American, Buffalo, Colonial and Robinson Airlines, with a combined total of 30 scheduled flights per day.

In 1962, a new airport terminal opened in the center of the airfield to provide access to the newly planned Interstate 81, with Mayor William Walsh and Airport Commissioner Frank Pittenger present to dedicate the new terminal.

In 1970, the International Civil Airport Organization awarded international airport status to Hancock Airport. With this designation, products manufactured locally could be shipped directly overseas and Syracuse would become a port of entry for foreign travelers. With this new status also came a new name—Syracuse Hancock International Airport. By this time, more than two million people a year were using the airport.

Beginning in 2011 and finishing in 2013, the “Passenger Terminal Security and Access Improvement Project” gave SYR a much-needed efficiency upgrade and facelift.  The 147,000-square foot addition connected – for the first time – the two concourses both pre- and post- security checkpoints. The project combined the previously separate security checkpoints into a single, centralized screening location on the second level of the center terminal. At a total project cost of $49.7 million, the project employed over 300 construction workers and achieved LEED Silver certification from the US Green Building Council. A highly-praised portion of the project that employees and passengers alike enjoy to this day is the large, floor-to-ceiling glass curtain wall behind the centralized security checkpoint overlooking the airline ramp.

The years 2017-2018 featured work on the $62.4 million “Terminal Improvement Project.” Completed on an aggressive timeline, the project featured a renovated terminal façade with glass curtain wall, upswept canopy to shelter pickups and drop offs in front of the terminal, and a new Grand Hall featuring an iconic stairway and renovated restrooms. The project also reconfigured the traffic lanes between the terminal and garage to improve passenger drop-off and pick-up.